But I do.
In fact whenever I hear my father complain about the French I remind him that we are part French.
He says the only part of him that is French is the part he sits on...
A lot of people really don't like Parisians, a lot of French people don't even like Parisians!
But I do.
Let me tell you why.
I love the culture, food, style, fashion, attitude, art, and language of France, but especially of Paris.
But mostly I love and appreciate how one Parisian shop owner made me feel after the horrific terrorist act in New York City on September 11, 2001.
Those of us who live very near NYC were so affected that day and for long after.  We felt so much grief, shock, and fear. I wondered if the world hated us. So when I received the letter below I burst into tears.
It made me feel so good and it restored my faith in people.
I still tear up whenever I read it.
I plan on stopping by the shop on Rue de Rivoli  this weekend and thanking the man that sent it. 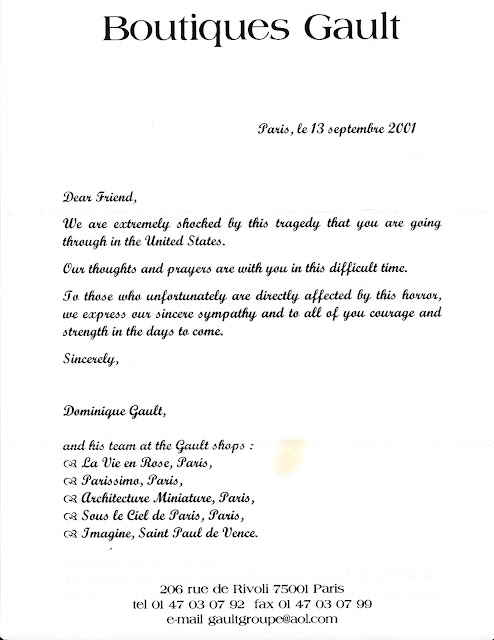 Posted by preppyplayer at 8:07 PM

When I was in Paris I was braced for the rudeness...and only once was confronted with it. Every person we came in contact with was polite and helpful. The one rude person....worked in the tourist office!!!!

Nice. Have a golden weekend!! xo

PS P I did feel like I worked for the newspaper on my trip to visit the vending man! LOL...

Have a great trip!